Obviously, most of the formal elements arise from the original ware. DeVries’ creative contribution is mostly as a curator in a conceptual manner.

How did Delft blue come about? These examples are Chinese in origin. The blue hue is thought to be in imitation of lapis lazuli and is a much older tradition (Wikipedia). It has a long history and undoubtedly DeVries has ample inventory of broken pieces.

The DeVries choice in (1) and (3) recreates the shape of the original ware in glass. The original potter’s shape is preserved. In (2) The repaired statue is surrounded by rose ‘flowers’ imagined and glued by DeVries.

Also of interest is the repeated figures in (3). Is there a story in the original? It’s lost to a casual viewer now.

“Every day in his [DeVries’] practice as a private conservator he was faced with issues and contradictions around perfection and worth: ‘The Venus de Milo’ is venerated despite losing her arms, but when a Meissen muse loses a finger she is rendered virtually worthless.’”

“Where even an almost invisible hairline crack, a tiny rim chip or a broken finger render a once-valuable object practically worthless, literally not worth the cost of restoring. There’s something incongruous about the fact that such an object, although still imbued with all the skills it took to make it – be it first-period Worcester, Kang-xi or Sevres – can so easily be consigned to the dustbin of history.”

DeVries is clear and conscious concerning his process. The cited web site explains his thoughts and theme exactly and in detail.

I felt instant identification with DeVries’ theme because of course it is mine as well.

And the other basic emotions:

Two strains are evident in these works. The multicultural tradition of fine ceramics is one and a conceptual aspect is another. DeVries cleverly uses both to make his point about impermance.

Here’s another take on repurposing:

A conceptual impulse such as DeVries’ is a common contemporary art rhetorical device. DeVries’ choice is however much more hedonic than what many artists use: a text on a wall.

I’m imagining in terms of cash flow he is a restorer first and an artist second. He is obviously a skillful and successful craftsman.

Postmodernist notes in his work are: recycling, craft advantaged over fine art, commentary on aesthetic values and critique of the art market (maybe capitalism too?).

Review of Kevin Marshall’s ceramics to answer the title question.

“A remix is a piece of media which has been altered or contorted from its original state by adding, removing, and changing pieces of the item. A song, piece of artwork, books, video, poem, or photograph can all be remixes. The only characteristic of a remix is that it appropriates [ed. Uh-Oh!] and changes other materials to create something new.”

“…A remix in art often takes multiple perspectives upon the same theme.”

Form -> Clay motivated irregular forms from slab roller or made with a pin tool in contrast with portrait faces, patterns and text

Color -> 1) porcelain or light brown or 2) celadon glazes and a) glaze drips on either. Celadon and porcelain originally from Eastern/Taoist but continues in European copies and adaptations. Drips are made from very thick glaze that runs upon firing.

Balance -> precarious at best. The work would seem to be more attuned to Western modernism but also can be justified by Japanese wabi-sabi. Marshall also lightly references the Pattern & Design movement (1970’s).

Harmony -> present only as a meta element – disparate methods of working the clay harmonized(?) by existing in the same ware. Patterns are areas of greater harmony.

Pattern: Marshall has been aware of and created geometric patterns since the 1970’s. He wrote software to draw multi centered patterns in the 1980’s. He returned to computer pattern drawing in 2005.

There are some patterns that one can identify as “belonging” to a certain culture(s). On the other hand patterns are widely adopted between cultures. One could even make the case that the simplest patterns are cross-cultural. It is an artistic impulse that goes back before cave paintings. The earliest patterns would seem to be body paint and on other perishable goods.

Marshall repeats the metta text as he paints it.

Europeans attempted to recreate porcelain for hundreds of years. They eventually succeeded as evidenced by delft, wedgewood, and dresden ware. Europe was not the only admirer.

“Specimens of Chinese pottery were found in the Malay Archipelago dating back to the third century A.D., T’ang Dynasty (621-907 A.D.) pottery, of the white ware, high-fired, porcelain type, was found at an archaeological dig in Samarra, (836-883 A.D.) Mesopotamia. Speculations are that this high-fired ware originated in China around 500 B.C.”

Chinese merchants were actively spreading ware as long as 1500 years ago. Although prized at home it was also a majpr export good.

Is Marshall’s work remix or appropriation? The alphabet he uses was created in China but has not been used for 900 years. The brush work that forms the basis of his calligraphy was taught by Michael Grady from Chinese and Korean inspirations. The text is a result of his practice of Theravada Buddhism. The patterns he embosses are from many world sources including but not limited to Eastern/Taoist. The portrait faces are inspired by Franz Xavier Messerschimdt (1700’s) from Austria. He was motivated towards irregular clay handling and drips by his actions using clay and his immersion in the culture of modernism starting in the 1970’s.

To look at this question from another perspective, we can consider the work in terms of Fair Use. Although appropriation (especially from another culture) is different in kind from copyright violation, there is no accepted means to determine appropriation. Perhaps using a lens of copyright law is one metric of appropriation.

• The purpose and character of the use. Commercial -> Bad

Marshall’s work is commercial. That is, it is not criticism, educational use or parody. One does not lose right to Fair Use by having a high score in any one of the criteria. Fair Use minus.

• The nature of the copyrighted work. Imaginative and unpublished -> Bad. transforming and creating new meaning -> Good.

What is the nature of some patterns and brush calligraphy? Certainly they are published, well known and imaginative. Do the transformations create new meaning? -> Definitely. Fair Use plus.

• The amount and substantiality of the portion used in relation to the copyrighted work as a whole. More than an amount needed for transformative purposes -> Bad

Marshall does not make direct quotations. Thus the amount of the portion is not substantial. -> Fair Use plus

• The effect of the use on the market or potential market for the original work. Competes with original / avoid payment for use -> Bad

Here the analogy with copyright law breaks down a bit. What could one claim as the originals that Marshall bases his remixes on? A broad swath through many cultures. No obvious original -> Fair Use plus

Pattern This is such a universal it needs no sociological justification. Time spent by Marshall 32 years.

Irregular This is a given in contemporary art. Time -> 34 years

Drips The use of chance and spontaneity of material a given in contemporary art. Time -> 3 years

Faces This is such a universal it needs no sociological justification. Time -> 16 years 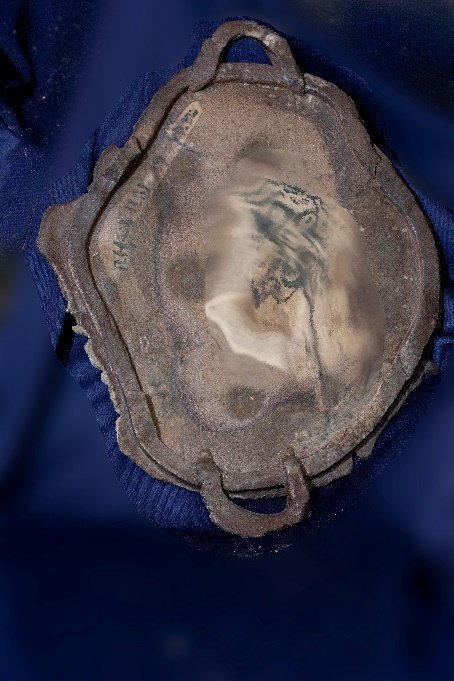 Selected quotations and questions related to the notion that “cultural appropriation is not the same as cultural exchange, when people share mutually with each other – because cultural exchange lacks that systemic power dynamic.”

“We want your stuff, but we don’t like you” Not applicable

“Marshall is pretending to be a race that he is not, and is drawing upon stereotypes to do so.” Not applicable

“…using someone else’s cultural symbols to satisfy a personal need for self-expression is an exercise in privilege.” Uh-oh

Does Marshall know the full history of this symbol? Is it used in other cultures as well? Yes and yes except for brush calligraphy.

Does the viewer know the identity of the person (Kevin Marshall in this case) in the important categories? Male cis-gender, white, over-educated, boomer generation.

By using or doing this symbol, is this person benefiting from it socially or economically while erasing the people who made it? No.

Why does he want to do this? Marshall has been creating patterns for decades. Marshall has studied ink brush and paper both in curriculum and independently. The remix(?) incorporates many of his fervent interests.

Is it to be cool? Because it looks pretty? (Heads up: if it’s just to be cool or look pretty, it’s probably problematic) Left as an exercise for the reader.

Is this a symbol of a political statement? No. If so, does Marshall align with the politics not in just dress and appearance, but in actual struggle and resistance?

Has he been invited by a member of this community to participate in this this culture, word, or symbol? No.

What role has this symbol played in his life? Profound.

Why does he feel entitled to this symbol? This document explains his entitlement.