“Veronica” said Betty “I’ve been robbed. The thief took my gold and diamonds.”

“Well, I had to be either Archie or Jughead. Nobody else has stayed around for a long enough time to get away without me seeing them.”

“I think it was Archie and I’m going to trick him.” said Betty.

Betty called Archie and told him her TV was broken even though it wasn’t. Archie came to fix it and he was confused because nothing seemed to be broken.

“Oh never mind”, said Betty “Would you like a beer Archie?”

It was late and Archie feel asleep in the Lazy-boy rocker.

“Now I’ll find out”, thought Betty. She opened Archie’s brief case and there were her diamonds. She grabbed them. While she was closing the briefcase Archie rolled over in the chair.

Betty got out her gun and opened up the briefcase again. She fired a shot in the air.

“Archie wake up! Someone was in the house and they opened your briefcase. Is anything missing?”

Question 1) What should Betty do next if her diamonds *were not* in Archie’s briefcase?

Question 2) Why did Betty open up the briefcase a second time?

Count me in as on the risk side. I was talking to my son just now and I said that I don’t touch mud unless I have a goal. This ‘goal’ is right in the middle of workmanship of risk.

B. 115 came about with the goal of a cup. In the course of making some utensil holders using the extruder, I kept two more cylinders at the end. The extruder always has a compressed puck that won’t extrude through. I took the two cylinders and split them, squeezed them together and settled them on the puck. The cylinders were floppy and fell into the shapes you see here. I pulled a spout and was done.

How do I make content about the time I live in? Especially when I work with mud and glass in a volcano fire?

Here’s another attempt. I printed a computer generated scene (by me) on a ceramic tile. Macramé holds the tile onto a clay body.

A glass tube (test tube) making the work a bud vase or incense burner, stands in the middle of the ware.

“Tobin! Is that cocaine?”

“So I stole it from Sandy, that’s what.”

Fawn was overwhelmed. Her stomach took a drop towards the floor and her hands tingled. This was way different than smoking  some weed in the park across the street from the school.

Indeed he had. With the money he was going to buy a Cadillac SUV, get it armored, hire a bodyguard, and drive to Mexico. Things were cheap in Mexico. Maybe he would buy guns in Mexico or maybe he would buy them here in the US. In Mexico, he would buy a fancy house and hire maids. Some of the maids would know someone in a local cartel. The money to be made was bigger the closer you were to the source. After that he would be set for life.

Sandy wasn’t dumb. She had one her friends/buyers in high school ask Fawn something.

DM: ” hey I heard Tobin has rail to sell”

DM: “yeah a lot but you didn’t hear it from me”

Fawn came home from school to a mother who had lost her mind.

“What.” Fawn realized she wasn’t going to get more from Mom. Mom had always been ’emotional’ and sometimes dialog with her was impossible. This was the maximum. But was Tobin really dead?

Fawn couldn’t make any headway with Mom. Fawn couldn’t even get her to sit or lie down. She was too agitated to do anything but rock back and forth on her feet and scream. Fawn called her father at work. She wasn’t supposed to do that.

“I see,” He’d been dealing with Mom for longer than Fawn had.

“Do your best with her. I’ll see what I can find out and be home as soon as I can.”

When he got home he told Fawn that Tobin had been shot in front of the SevenEleven. Driveby. He taken enough shots that he was dead before anyone could get to him. At the emergency room, Mom got a heavy dose from the doc and was either asleep or comatose. At that point Fawn and Dad were grateful for the silence.

A year later Mom was not much better and Dad was gone. Of course Mom had lost her job. Fawn hoped she knew enough to get Mom on disability. Uncle Harry was trying to help but he lived in another state far away.

Fawn was on her third shift. She was lucky that it was a front desk job at a hotel. Fawn could swear she was able to sleep with her eyes open.

Dr. Dobson knew what she was doing. She’d only seen the various scans of the patient. Black and white but mostly hazy gray. She knew how to read them and also what they wouldn’t be able to tell her.

Fawn was going after a bullet close to the spine. If she made the slightest mistake it meant the patient might be a paraplegic or dead.

“Is he under?” Fawn asked the anesthesiologist.

The respiratory team was prepared to keep him alive if something went awry.

Would she need to do a vertebra fusion? She’d only know once she was in. A 9-mm bullet was in with its head facing the incision, completely encased in scar tissue, blocking the flow of cerebral spinal fluid. There was a special tool for grabbing bullets. Huh this is America.

Fawn was as cautious as she had learned to be while performing the dissection. No damage to the nerve roots if she could help it. She put on the surgical microscope headset. She had two grips to move the light in tiny increments.  She needed to be incredibly exact to release the bullet from the scar tissue. If she pulled too hard it was over for the patient, but if she didn’t pull enough the bullet was going to stay stuck. Got it. Bullet free from from the surrounding tissue.

There was no applause but a huge release of tension in the room.

As team was finishing up Fawn got to see the boy, Tobias. He had gunshot scars in many places. Tobias/Tobin. Fawn broke down and cried. Really sobbed for the first time in decades. The rest of the operating room did not know why. She’d just been phenomenal.

This is what Mom saw and it never went away.

Computer ceramic tiles. Kurt Vonnegut said it: “I think that novels that leave out technology misrepresent life as badly as Victorians misrepresented life by leaving out sex.”

But here I am playing with mud and sending it to the volcano. ‘Not misrepresenting’ is a riddle I hope to solve. Or if I can’t solve it to make progress? Is getting it half right worth it?

So my previous review was ‘Hidden Spring’ by Solms. Barrett’s book finished the hold at the library and I borrowed it.

The very first sentence called out the premises propounded by Solms. I had to look up any webpage with both their names. Panksepp is the name of the scientist that provided the basis for Solms and that is the name I searched for.

Wow. They call each other every name of disrespect one can use about another researcher.

Facial expressions and emotions are the same in every culture. Each culture just has different names for them. Nope same bias.

Emotions are learned. Period says Barrett. She calls them constructed but same difference.

I am really looking forward to the rest of Solms now that I know Barrett’s stance.

I’ve got ideas. A dangerous practice. Here are two of them that came to me: Porcelain or not I haven’t made up my mind. The floor will be a printed tile broken up in pieces. Like a mosaic, 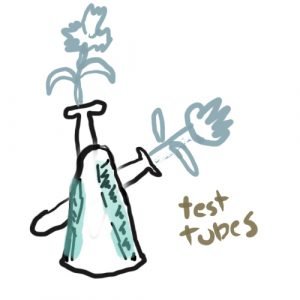 A flower vase for two buds or other. Porcelain with celadon.

Hollis was tired. Going on a book tour was “Sorry I’m not fun anymore”. She was not going to write that book. There was one more reader, the last in line. She was not holding a book though.

Hollis did some quick arithmetic. Of course she remembered Betty Bell. But it was a common enough name.

“Named after the Betty  in ‘Year of Goodbyes’ ?”

Hollis looked around. The bookstore clerk that had been her escort was starting to close up the store. He was as far away from her as he could get and still be in the store. There was no one else around.

“Yeah you can play like you don’t know what. I was eighteen when some customer told me ‘Hey Betty you’re in a book’. Funny. So I read it. The parts you didn’t get right, you probably put in to throw any of us that knew off.”

“Betty Bell is a character in a book. She’s imaginary.”

“Then how you did know dad… and sister Caroline you called her Charlotte…and the time train hit our dog…and I went to work at the “Glazed Cheer Grille”… so you never been to Mount Victory either?”

Hollis had never had to deal with this level of crazy before. The staff at each bookstore was supposed to do that. This was a small bookstore though and Ed? or was it Chris? was now not around. She could yell for him but what if that made it worse?

“…got worse all the things that happened to Betty in the book happened to me after. The Grille burned down just like it did. I thought Bud was different from ‘Fred’ but then he done the same things. Who are you? What are you?”

Because her mind was racing, Hollis’ thoughts went in a strange direction. A lot of material appeared in her awareness in a instant. Although Betty was not a major character Hollis had put a lot of time fleshing her out. Especially because Betty betrayed Nikki, the protagonist at a key point in the plot. Betty, Betty, Betty. Her boyfriend was originally ‘Buddy’ before she changed him to ‘Fred’. She had changed the town’s name from  ‘Mount Gilead’ when that sounded too biblical.

Hollis let out a big breath. She’d been holding it. She drew on what she knew of conflict resolution.

It came rushing out. As Betty told more of the concordances between ‘Year of Goodbyes’ and her life she started to be less agitated. Unless she was more mentally ill than anyone Hollis could imagine it was starting to get creepy. There had not been a ‘Nikki’ in BettyTwo’s life but there had  been a Vicky. BettyTwo told that she had been betrayed by Vicky. Hollis recalled that BettyOne had thought the same thing in the world of the book. She had left that backstory out to keep the plot moving. She knew better than to say anything about it.

Betty was wearing out. Hollis had no idea what to do next.

“Do you want to get a drink?” Hollis was no longer afraid.

Hollis was really stumped. She started to wonder if she was in some kind of afterlife where she would be confronted by every one of the characters she had written.

“Write me a happy ending. You owe me that.” Betty turned and walked out almost at a run. Hollis knew better than to try and catch her. She had a job to do.

Betty meet Betty. Hollis has her eyes shut because it’s dark, too dark to see.